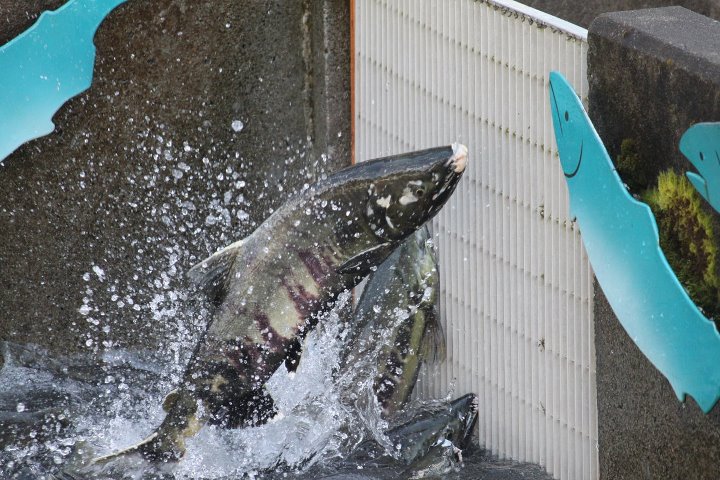 Have you ever cooked a piece of fish but found that a white substance appears and solidifies on the fillet’s surface? Many people assume that this is just fat from the fish (particularly since it is more prone to appear and be visible on rich fish like wild Alaska salmon) but it’s actually a protein called albumin. Albumin is just one of many proteins found in seafood (and many other foods as well), typically occurring between the layers of muscle that turn into a fish’s ‘flake’ when cooked.

Visible albumin is usually the result of high heat. It’s more delicate than other proteins, so when these rapidly contract they squeeze albumin to the surface where it congeals. Technically there’s nothing wrong with it, though it may be a sign that your fish will be overcooked (at least at the surface), but here are two thoughts to keep in mind. If you’re cooking your seafood using a supposedly gentle method, poaching for example, and you see lots of albumin on the surface of your fillet then the heat is most likely too high. Poaching, roasting and hot smoking should all use sufficiently gentle heat so that all proteins cook slowly and evenly, preventing the ejection of any albumin. To get an idea of its delicacy, albumin is the primary constituent of egg whites; so thinking of how heat would cook an egg white actually makes albumin a good troubleshooting tool.

However most people want to avoid it solely because it takes something away from the fish’s visual appeal. There are a few ways to combat this problem. First, when searing fish make sure you’re always adding a fillet with dry surfaces to a sufficiently hot pan, and start cooking with the side you plan to present. There’s a few reasons for this, but in terms of albumin, if you start your fish flesh side down in the pan then you have the chance to create a nice surface crust while contracting the proteins in a way that pushes albumin back towards the center of the fillet. You’ll be starting with high heat, but when you flip the fillet over you can transfer the pan to the gentler oven to finish cooking, keeping the albumin from being pushed out.

Secondly, albumin is water-soluble so using a wet or dry brine can draw it to the surface where it will be denatured and evenly distributed before you start cooking. In this case it actually contributes to forming a nice even crust instead of marring it. As renowned chef Thomas Keller says in his ‘Master Class’ on the subject:

“While the dry brine enhances flavor by adding salt, it also creates a two-way street where the delicate albumin, a water-soluble protein, is drawn to a surface that is simultaneously dried out. So in addition to the flavor benefits we see an aesthetic improvement when the fish or meat is cooked: a beautiful, crisp brown crust.”

Lots of fantastic cooking happens without us really knowing what happens in the pan, but understanding albumin shows how knowledge of the science behind our food and cooking can help make our dishes even better. Interested in learning more? Take a look at these great books on the subject: